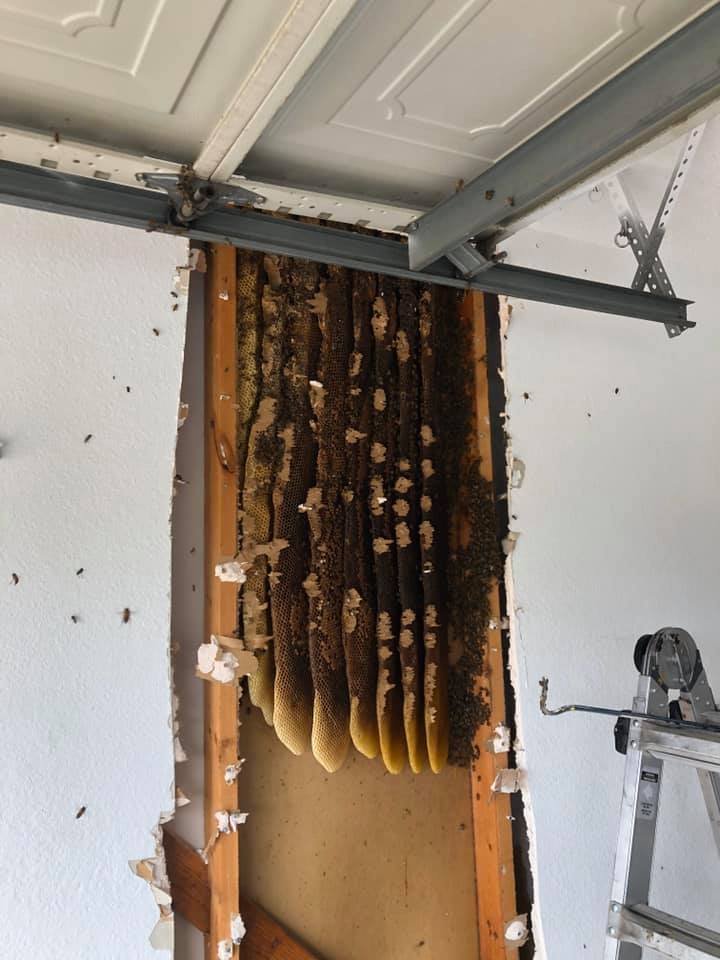 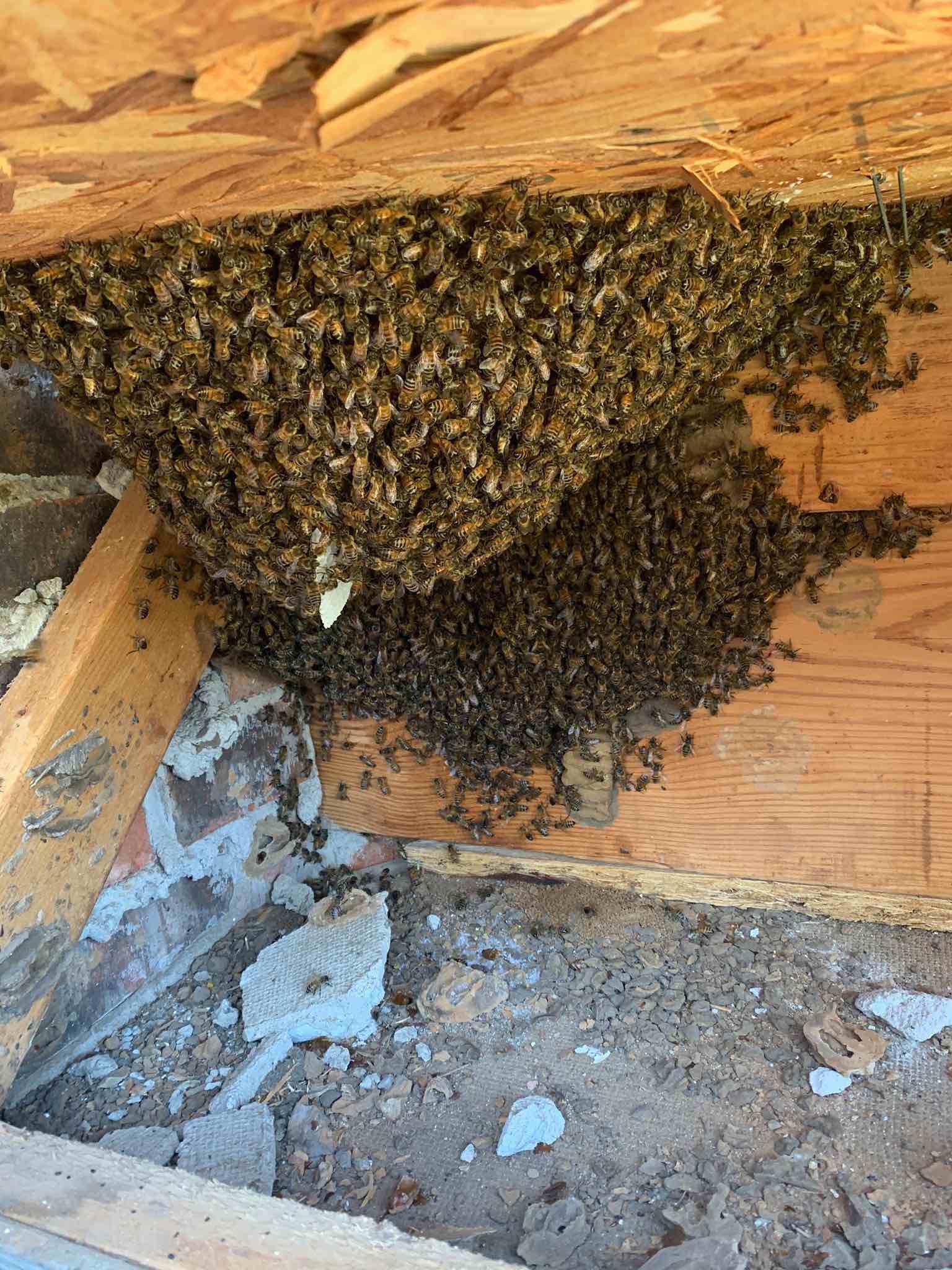 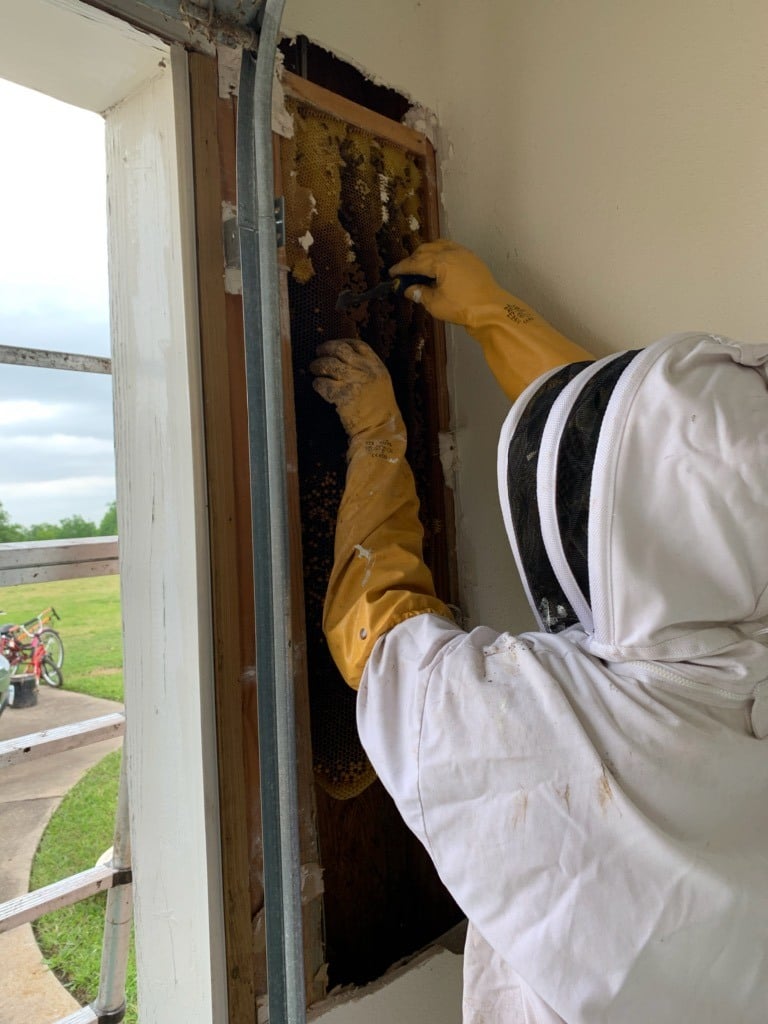 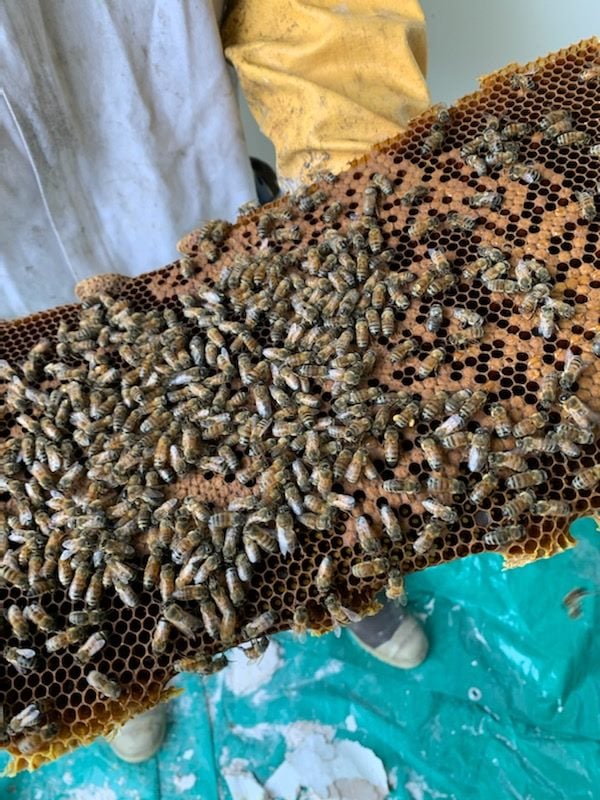 
Texas Beekeeping comes with its fair share of problems including many types of pests that infest and harm beehives and bee colonies. Treated or Sprayed beehives become more susceptible to these diseases which can quickly overrun an apiary. Certain states like California have import restrictions on hives with small hive beetle. Here are a few of the more common parasites that infect beehives. Pest infestation can quickly decimate whole apiaries if left unchecked and cause bees to swarm and leave their hives.

The varroa mite, Varroa destructor, is an old nemesis of apiary keepers. This flat, pea-shaped, eight-legged parasite can quickly decimate honeybee colonies. It latches onto honeybee brood cells, using the time it takes the brood cells to fully emerge as drone and worker honeybees to reproduce and spread further among the colony. When the varroa mites feed on the honeybees, they transmit RNA viruses that devastate the colony. Deformed wing virus (DWV) is one such RNA virus. DWV causes emerging honeybees to develop disfigured, nonfunctional wings and compromised immune systems. A sick, flightless bee cannot pollinate flora and has a shorter lifespan. Any flowers an infected honeybee does land on to pollinate becomes contaminated with the virus, causing future pollinators to contract the disease.

Honeybee Parasites Let us help save your home!

The varroa mite, Varroa destructor, is an old nemesis of apiary keepers. This flat, pea-shaped, eight-legged parasite can quickly decimate honeybee colonies. It latches onto honeybee brood cells, using the time it takes the brood cells to fully emerge as drone and worker honeybees to reproduce and spread further among the colony. When the varroa mites feed on the honeybees, they transmit RNA viruses that devastate the colony. Deformed wing virus (DWV) is one such RNA virus. DWV causes emerging honeybees to develop disfigured, nonfunctional wings and compromised immune systems. A sick, flightless bee cannot pollinate flora and has a shorter lifespan. Any flowers an infected honeybee does land on to pollinate becomes contaminated with the virus, causing future pollinators to contract the disease.


Varroa mites tend to ramp up in the early spring when bee colonies are preparing for the spring nectar flow. Drones are highly susceptible to varroa mites due to their large size as well as many other native Texas bees. Of these bumble bees once prevalent in the US are considered threatened predominately due to varroa mite infestations.

Bees in your Attic 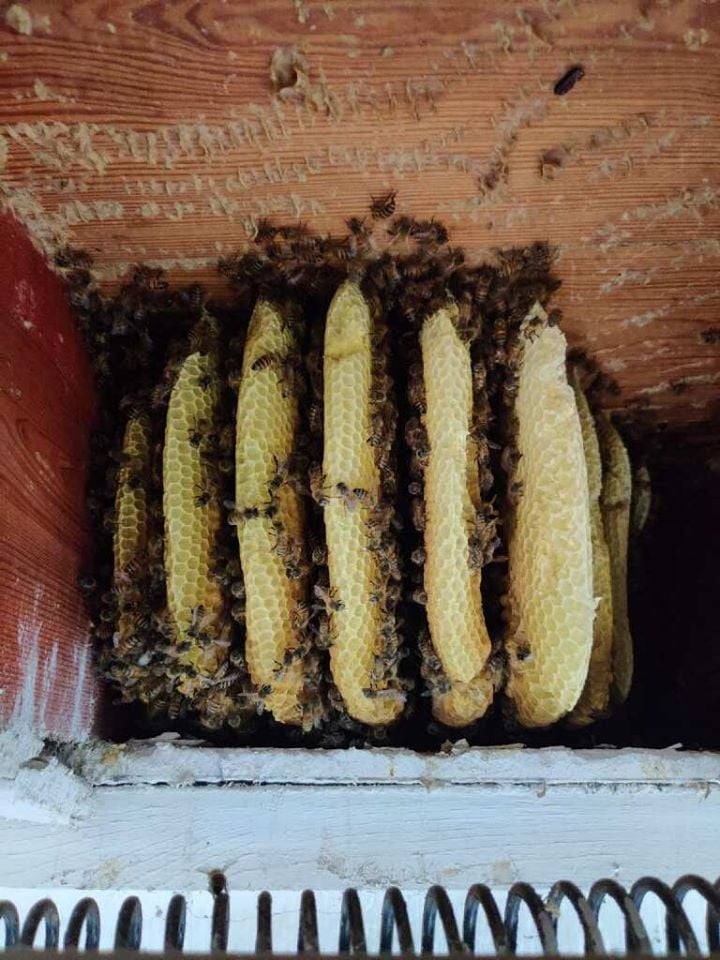 Before you treat for varroa it is always good to either look for mite counts using a count board or do it as part of your regular scheduled maintenance as most professional beekeepers do.

Bees in your Walls

There are many methods to treat varroa mites in your colony. Here are a few that we have found to work quite well.

Mason bees are most active in the spring and get their name from their habit of using mud to close nest cavities. In nature, they look for hollow stems or a twig to build nests. They also will readily come to bee hotels where environmentally conscious gardeners have pre-drilled holes for them.

The small hive beetle, Aethina tumida, is an invasive species of beetle originating from sub-Saharan Africa. Adults are reddish to dark brown/black and about 5.7mm long and 3mm wide (about the size of a ladybug). These beetles are not considered a pest in their native range, as they do little damage to honeybee colonies. The same cannot be said of North American honeybee colonies. Ever since this beetle was first discovered in Florida in 1998, it has spread throughout the United States, while remaining particularly prevalent in the southeastern states. Small hive beetles are considered to be opportunistic pests; taking advantage of bee colonies weakened by primary factors such as varroa mites. While honeybee colonies can easily deal with adult small hive beetles, the damage lies in the large amount of eggs adult beetles can lay. These eggs rapidly develop in only 2-4 days, resulting in numerous small hive larvae. The larvae feed on honeybee brood, pollen, and honey, causing the honey to ferment, thus becoming unfit for honeybee or human consumption. Once 7-10 days have passed, the larvae pupate in the soil nearby, becoming adult small hive beetles in 3-6 weeks. The adults are strong flyers, able to fly several miles in one day, thus repeating the process at neighboring hives.

Bees in your Roof 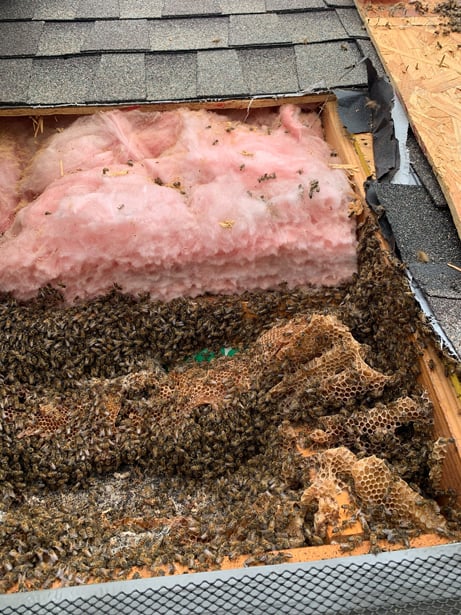 There have been many innovative ways to contain small hive beetle over the last decade as it has become a predominate issue for southern beekeepers. A weakened hive will become overrun within days causing the honey to run and ferment ruining the drawn comb and honey. Although there are no insecticides safe for hives to rid themselves of small hive beetles Here are a few methods to prevent small hive beetle.

Small Hive Beetle Taps – these consist of either small comb like inserts filled with oil or water that are added to the top of the hive frames or bottom boards that have v shapes with holes and an oil pan. The beetles simply crawl in but cannot crawl out. Another most recent method that we have found works great is a Swiffer dust pad. The bees will fluff it up pulling on the threads of the pad and the beetles will crawl in becoming lodged and die.

Hive Positioning – Setting a hive greater than 2’ off the ground not only is what the bees prefer but will make it very difficult for small hive beetles to regain access to the hive reducing overall numbers. Putting hives on improved surfaces as concrete or using ground cover cloth roofing felt or shingles will also prevent the small hive beetle from being able to pupate easily and thus reduce the numbers. Also keeping hives relatively full will reduce the amount of small hive beetles. Avoid additional covers with cracks and areas. Sand soil is the worse for SHB as it provides an excellent area for SHBs to pupate.

Ground Contact insecticides– Although not recommended some beekeepers have found applying ground contact insecticides to apiaries is a preventative measure if the area treated is under an active hive and not directly in a hives path. Infested apiaries it is almost necessary to treat the ground for residual SHB larva to prevent future devastation before putting bees back. Colonies overrun with SHBs need to be set out and rinsed out and left to freeze over the winter. This will destroy SHB eggs and larva as they tend not to like the colder climates

There are two species of wax moth, the greater wax moth, Galleria mellonella, and the lesser wax moth, Achroia grisella. Lesser wax moths have silver-grey or beige bodies with a distinctive yellow head, sizing in at about 13mm. Greater wax moths have beige-brown bodies and are about 16mm in length. Like the small hive beetle, wax moths are opportunistic feeders, eating pretty much everything found in a honeybee hive: beeswax, pollen, honey, honeybee larval remains, honeybee cocoon silk, and honeybee droppings. Female moths invade hives during low-light hours, laying up to 600 eggs. Once hatched, the larvae start burrowing through the hive, eating the beeswax as they go, resulting in tunnels of silken web. This destruction of the comb can kill a weakened hive, whereas a healthy hive will simply remove the larvae, thus keeping the wax moth population under control.

We would rather see that hive safely relocated than poisoned by would be removal technicians.

Wax moth are a tough pest and probably the most predominant in Texas for ruining hives causing the bees to swarm and wreaking havoc on woodenware. Small hive beetle larva is one of the few animals capable of digesting plastic! They will eat small holes in frames making them unstable in extractors when removing honey, they leave threads waste and cocoons in hives which will cause bees to swarm, and they ruin drawn comb frames. A wax moth will fly miles attracted to the scent of honeycomb/ beeswax.

Prevention of wax moth is twofold.

Menthol Crystals – Unused and stored comb frames and supers needs to be separated with plastic and stored in stacks of 2 supers or deeps with plastic between them. Menthol crystals will deter moths from laying eggs on the frames. Be sure to air frames for 1 week prior to adding to beehives.

Hive Construction – Avoid the use of screen bottom boards. These allow access to the hive which bees cannot defend. Reducing entrance and eliminating access points to a hive that can be guarded by bees will prevent wax moths from entering hives.

Part of the guarantee and warranty for our work is bee proofing your house. We seal up cracks and crevices and remove the space of the hive preventing it from coming back. We offer limited lifetime warranties for any bee removals performed to an area. Wasp removal and wasp nests as well as bee swarm removal are not warrantied as these come back just due to the north Texas environment. Honeybee hive removal if done correct should never have honeybees that come back to the area.

Safe bee removal is really a job for the professionals. It is best to leave it to one of our removal specialists to avoid painful stings, or worse, discover you are allergic to bees!

Once the live removal is complete, we inspect the rest of the area and house for any other hives or swarms of bees in your house restoring it to its original condition (unless otherwise agreed upon).

Bee proofing your home or business will prevent future bee squatters, and you and your neighborhood bees can live in harmony. We seal up holes check woodpiles, brush and other places bees might use to build a hive in your home as a preventative measure to avoid the bee removal process in the future. Scout bees don’t like it when we seal up cracks and crevices. Our preventative services also prevent a deterrent to yellow jacket wasps and hornets. Ask our technicians about this service

Our locally owned and operated company has a commitment to our customers "treat everything like it was your house" and "Always do the right thing."

Think of us next time you search for "Bee removal near me" or beehive removal first! If you have questions email or call, we are always here for our customers.


Sign up to hear from us about Honeybee Parasites specials, sales, and events.

Honeybee Parasites Questions Comments Concerns?
We love to hear from our customers!