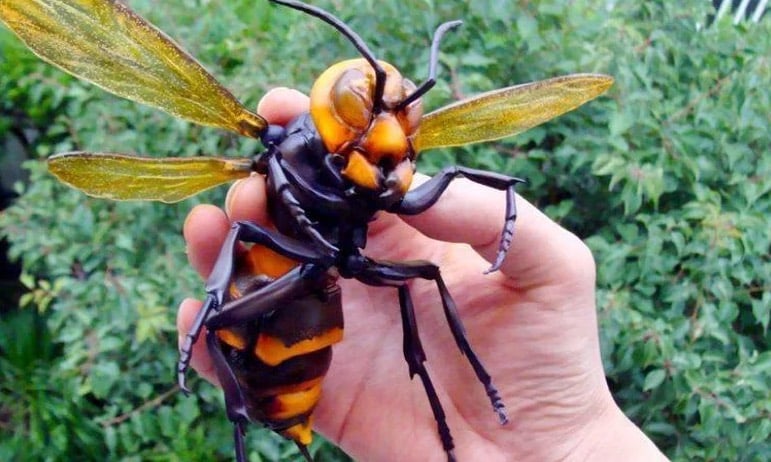 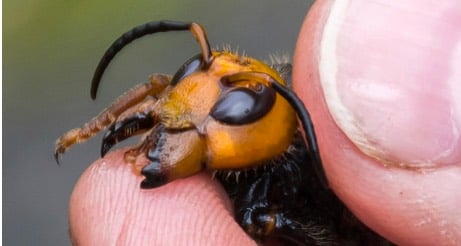 
Apiary keepers all across America are facing a new threat to their hives: the Asian Giant Hornet, Vespa mandarinia. This hornet is native to China, India, Japan, the Indochinese Peninsula, and parts of Eastern Russia, preferring to live in low mountainous and forested regions. This is a subterranean species, preferring to dig burrows or re-purpose burrows that have already been dug by rodents and ground-dwellers. Queen Asian Giant Hornets can exceed a body length of 2 inches and have a wingspan length of 3 inches. The workers don’t exceed a body length of 1.6 inches and also have a wingspan length of 3 inches. Both share a stinger length of ¼ inch. This makes the Asian Giant Hornet the second largest species of hornet in the world, and is on average 5 times bigger than a honeybee. Queens and workers differ only in size, and while both have reproductive anatomy, only the queen reproduces. Drones are similar to workers, but lack a stinger. Coloration does not differ between queen, worker, or drone. They have a broad orange head, orange mandibles with black teeth that they use for digging, a dark roast coffee brown thorax with two yellow-grey wings, an orange and dark brown striped abdomen, orange forelegs, and dark brown hindlegs.


Attacks are Split into 3 Stages

The Asian Giant Hornet is a eusocial species, meaning it has a highly complex social structure comprising of cooperative brood care, overlapping generations within a colony, and a division of labor among members of reproductive and non-reproductive classes. What makes Asian Giant Hornets truly unique among Vespa species, is that it’s the only eusocial Vespa species to stage group attacks on beehives and wasp nests. These attacks are split into three stages. During the first phase, worker hornets will wait near the entrance to a honeybee hive. When a solitary honeybee leaves the hive, a worker hornet will catch the honeybee with their mandibles, killing the honeybee, then bring the carcass back to their nest to feed to their young. The second phase involves a small group of several dozen hornets focusing in on a single bee hive or wasp nest that had previously been marked with a pheromone secreted by a worker hornet. A group of only 30 hornets can kill a colony of honeybees 25,000 strong in just a few hours. The attacking hornets remain near the entrance to the hive or nest, ignoring the bodies of the dead, continuing the attack until the hive/nest defenders are defeated. During the third stage, the hornets begin to occupy the newly conquered hive/nest, becoming highly territorial and threatening those who wander too close the hive/nest by loudly snapping their mandibles.

Need a Bee Removal? Let us help save your home!

Currently, the only confirmed sighting of Asian Giant Hornets in North America have been in Washington State and the Vancouver province of British Columbia, Canada. This means that you have very little to fear in regard to your personal safety, as there have been no sightings in Texas. These hornets typically don’t attack people or pets, preferring to keep to themselves, but will attack when feeling threatened. Unlike a bee, they can sting multiple times and their venom is more toxic, but as long as you keep a respectful distance, these hornets will leave you alone. As for the impact on North American bee colonies, that has largely yet to be seen, as Asian Giant Hornets are still very new to this continent, though none can deny that these hornets pose a potential threat.

Bee Removal Estimates are 100% free at no cost to you.

If you need urgent bee removal in Dallas-Fort Worth or want to speak with one of our bee keepers to discuss hive removal please call us as we are often available after hours.

Bee Removal from your home

Bee proofing your home or business will prevent future bee squatters, and you and your neighborhood bees can live in harmony. We seal up holes check woodpiles, brush and other places bees might use to build a hive in your home as a preventative measure to avoid the bee removal process in the future. Scout bees don’t like it when we seal up cracks and crevices. Our preventative services also prevent a deterrent to yellow jacket wasps and hornets. Ask our technicians about this service

Our locally owned and operated company has a commitment to our customers "treat everything like it was your house" and "Always do the right thing."

Think of us next time you search for "Bee removal near me" or beehive removal first! If you have questions email or call, we are always here for our customers.


Sign up to hear from us about Giant Hornets specials, sales, and events.

Giant Hornets Questions Comments Concerns?
We love to hear from our customers!