Wasps and Hornets of Texas

Back / Wasps and Hornets of Texas

Wasps and Hornets of Texas


Wasps come in two distinct categories: eusocial and solitary. Eusocial wasps have a highly complex social structure comprising of cooperative brood care, overlapping generations within a colony, and a division of labor among members of reproductive and non-reproductive classes. Solitary wasps are just that – solitary. There is one female wasp per nest; she forages, builds her nest, and cares for her offspring alone. Some solitary species will live in aggregations, which are several nests in the same area. Think of it as a group community with one mama ruling each household. Wondering which species of wasp you saw today? Here is a list of the most common species of wasp found in Texas. 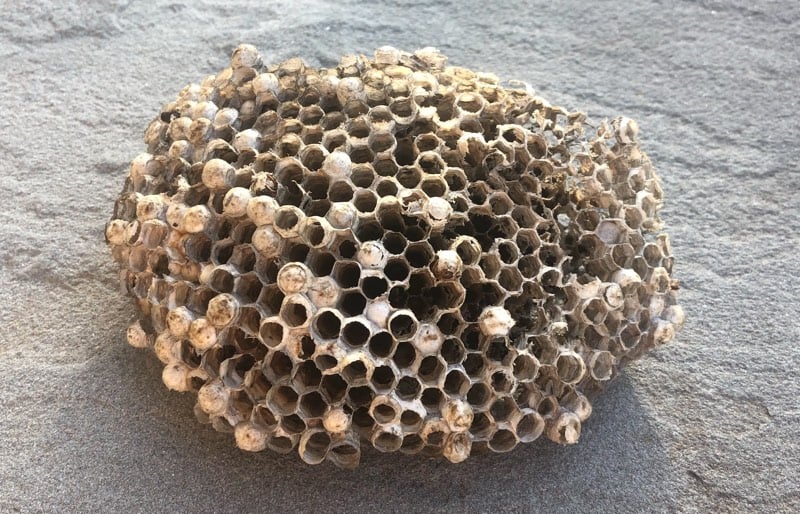 Yellow jackets are frequently mistaken for honeybees due to their similar coloring and patterns: a black body with yellow bands across their thorax and abdomen and yellow legs. Unlike honeybees however, Yellow jackets are hairless and have an extremely thin waist. This is an aggressive and highly territorial species of eusocial wasp that won’t hesitate to attack potential threats. They are among the smaller species of wasps with adults measuring about ½ inch long. Don’t be fooled by its size; their venom is more potent than a honeybee’s, thus making it significantly more painful. Yellow jacket nests are often located underground, inside house cavities, or suspended from a tree. 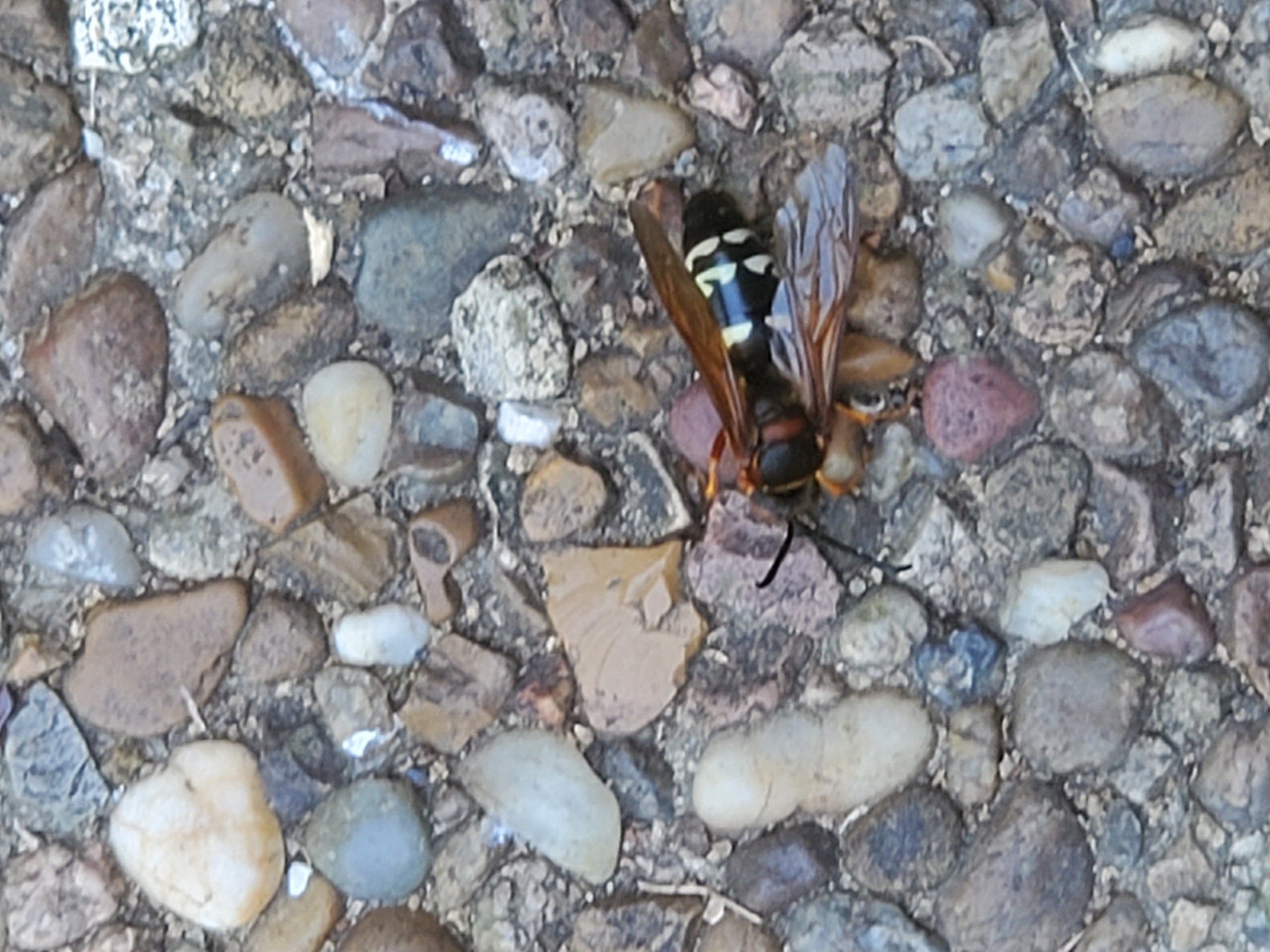 Cicada Killers are among the largest species of wasp found in Texas; adults reaching up to 1-½ inch in length. They have a rusty red and brown head and thorax, and yellow and black bands around their abdomen. Despite their large size, these wasps don’t pose much of a threat to people: males don’t have a stinger (and are therefore harmless) but are territorial, and females will only sting when attacked and are not territorial. Cicada Killers are a solitary species, so instead of having one big nest and colony like social wasp species do, they instead live in aggregations, which are several nests in the same area. Females will dig a burrow in well-draining soil in an area with lots of sunlight. 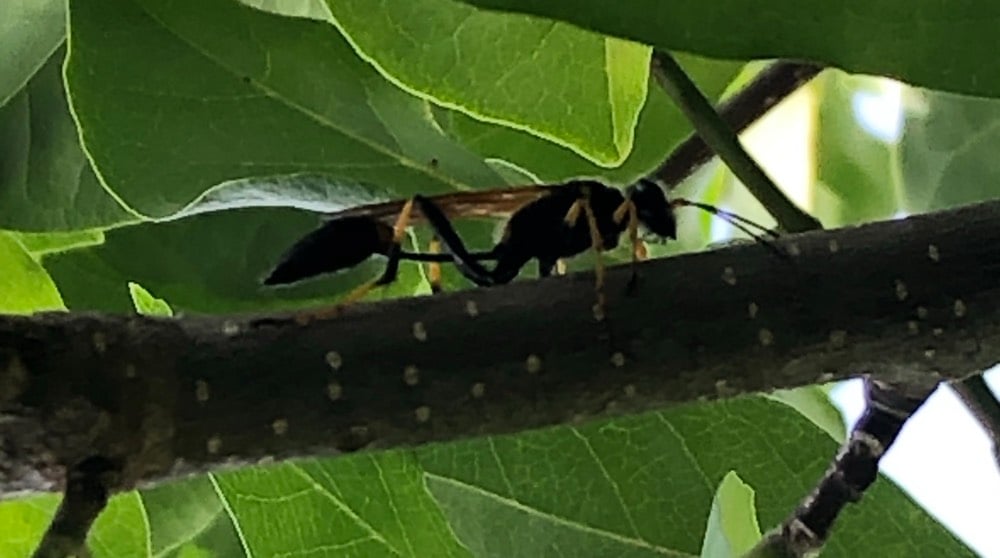 The term “mud dauber” doesn’t refer to a single species of wasp, but rather two entire families: the Sphecidae and Crabronidae families. Mud daubers build their nests from mud and will build them in high, shady places, such as an upper corner of your porch. This is a solitary species of wasp, meaning one female dauber is responsible for a single nest. They are distinct in appearance in that they have very long, narrow, needle thin waists (Sphecidae) or they have long yellow and black striped abdomens with flat oval shaped heads (Crabronidae). Mud dauber’s grow up to an inch in length, with stings being uncommon as they do not defend their nests.

Paper wasps are one of the most common species of wasp found in Texas. They are about 1 inch long and can vary in color, from reddish-brown, to brown, to yellow. The easiest method of identification is their distinctive nest shape. Paper wasps construct their nests from wood fiber that has been mixed with saliva. Their nests are umbrella shaped (giving them their nickname “umbrella wasps”) with open brood cells, and hangs from a single stalk. This is a eusocial species of wasp, though unlike yellow jackets, paper wasps are not highly aggressive or territorial, preferring to keep to themselves unless their nest is disturbed.

Bald-faced hornets are not true hornets; they are a eusocial species of wasp and a relative of the yellow jacket. They have black bodies with white patterns along their face, thorax, and abdomen. They construct their nests with wood fiber mixed with saliva, like paper wasps. Unlike paper wasps, their nests do not have open brood cells and are instead protected with a thick outer shell and have an opening at the bottom. Bald-faced hornets normally build their nests in wooded areas, but they have been known to build them on utility poles, house siding, and inside shrubs. Like all eusocial bee and wasp species, bald-faced hornets will defend their nest if a potential threat comes too close.

Mexican honey wasps have dark brown thorax and head, with alternating yellow and black bands on their abdomen. They are about 1/3rd of an inch long. This is a eusocial species of wasp, preferring to make their nests in the canopies of trees. Mexican honey wasps are neotropical, originating from Central and South America. This is one of few wasp species that produces honey, thus these wasps are believed to be beneficial to the environment. The honey is even considered a delicacy among some Mexican cultures. Males don’t have a stinger, thus making them harmless, while the females will sting if provoked. Like all eusocial species, they will defend their nest when agitated, though Mexican honey wasps are nonaggressive when left undisturbed.


Sign up to hear from us about Wasps and Hornets of Texas specials, sales, and events.

Wasps and Hornets of Texas Questions Comments Concerns?
We love to hear from our customers!